The Omaha Lancers are proud to have Off The Bench as the official sponsor of the Matt Thurber Memorial Tournament. Off The Bench is a local, family owned hockey pro shop. We pride ourselves in offering premium hockey equipment and even better customer service.

Because we know hockey, we actually take the time to evaluate our customers and properly fit them in the right gear for their skating level and budget. From the little Mites to the Beer Leaguers, we can outfit everyone.

Sharps, rivets or sanitizing, we can also service and repair all the gear in your hockey bag. Come in and see why we are the area’s premier hockey pro shop.

Give OTB a visit during your stay at:

Welcome to the Registration for the 2019 Matt Thurber Memorial Tournament!

The Omaha Lancers are proud to host the 2nd Annual Matt Thurber Memorial Tournament. This year, the tournament will expand to two weekends to allow for more teams and better ice time.

Please read the complete set of rules on the following page before registering your team. The Matt Thurber Memorial Tournament will take place over the following weekends:

*Games will be scheduled to start mid afternoon of Friday*

There is limited space available at each level so pay early to confirm your spot! All levels must have at least 5 teams before October 18th or the division will be cancelled. This is a stay to play tournament so please view the hotel options on one of the following pages. Failing to stay at one of the host hotels will result in disqualification. 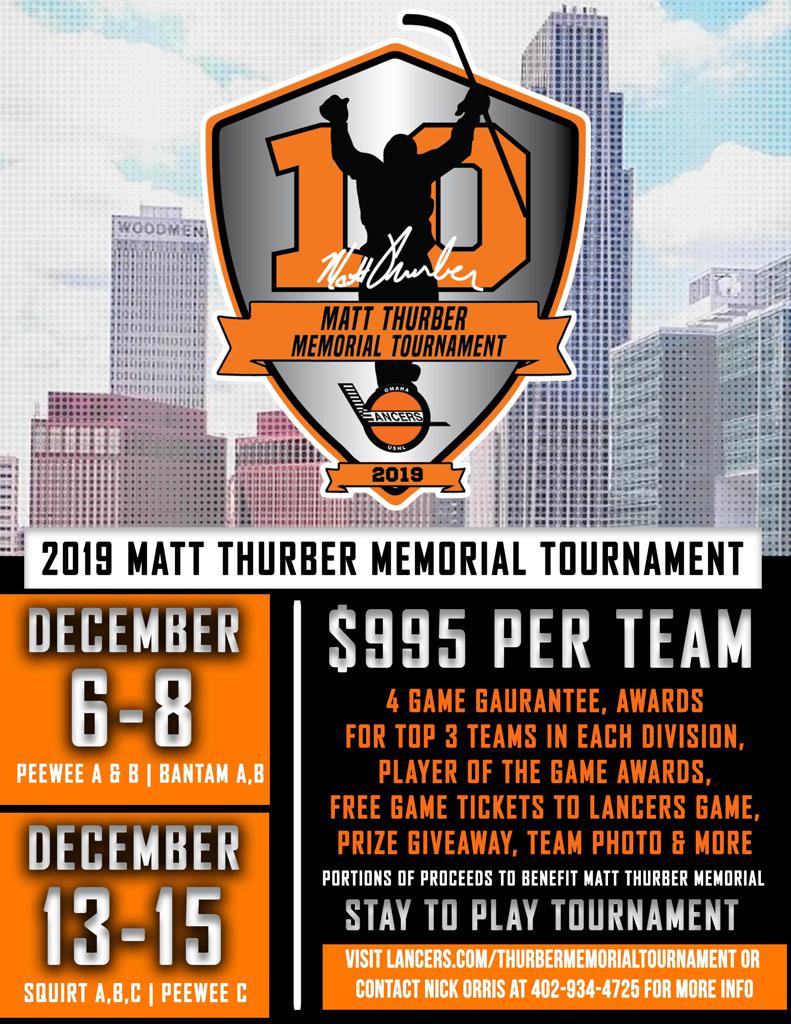 A Little About Matt Thurber

Matt Thurber, a native of Beaver Dam, Wisconsin, came to Omaha at age 15 to play hockey for the Omaha Lancers. He sits 12th in all time total points in the Lancers storied history, and 5th in assists.

Still, his time in Omaha was marked by tragedy, when his mother, Cathy, died from complications from outpatient surgery. It was at the urging of his father, Ray, that he returned to the Lancers.

Upon his return, in 2008, Matt was part of the Lancers team that won the United States Hockey League championship. He led the team in assists with 41, and his 14 goals made him the team’s third-leading scorer.

Matt Thurber went on to play hockey in college, and afterward, for the Bakersfield Condors of the ECHL.

After an unfortunate health condition ended his pro career, he returned to Omaha to pursue his passion, which was helping youth hockey players in the community.

In May, 2018, Matt's life was cut short at the young age of 29. He leaves behind his wife and young daughter who he dearly loved.

Now, the Lancers organization honor Thurber's legacy with a tournament for players aspiring to be what he was, a great person and an inspiration to us all. A portion of the proceeds will go toward a fund for his daughters future education set up by the Lancers, which has raised over $20,000.

SCROLL UP FOR EVENT DETAILS

Please direct any questions regarding this registration to:

Select an option to continue with the registration.